It has taken several days to structure the latest passage of paint, as shown below. The header image is the whole work as it is today.

The limit of its fineness is reached when the oil paint becomes sticky due to its oxidation.  I have never counted as I go – that would be too arduous but there are countless lines inscribed; 10,000 is the number considered to be countless in Chinese culture; there are at least 10,000, I feel sure.

The task of creating the structure is physically demanding as every single line is given a definite beginning and end. I have to control each line and concentrate so hard that my state of mind becomes beyond meditative or contemplative, it is trance-like. Secondary, contour lines emerge in the process at right angles to the individual lines, as if they just grew there, they were cultivated.

The form is fossil-like – the earliest ‘paintings’ were scratched onto rocks and cave walls – they had physical structure – they did not float on the surface, being etched into it they were part of the surface physically, indelibly, permanently (as far as anything can be permanent) 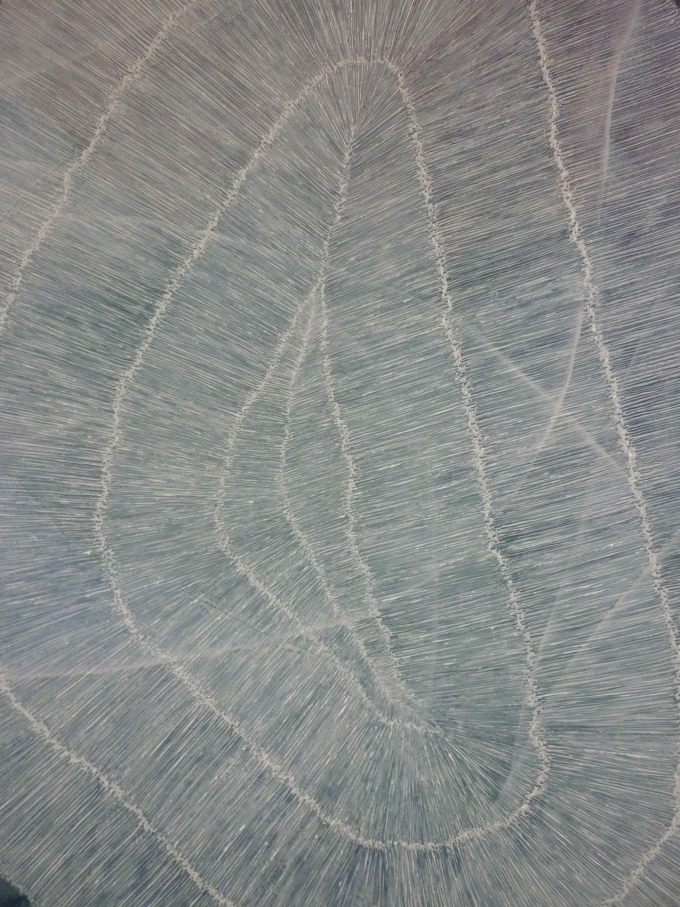 The tiny scrapings of paint from each and every line, I do not waste, recycling them into the later passages of the painting.  I have also collected and preserved them elsewhere, including on glass slides normally used for now-obsolete photography of the pre-digital era (note to self must take a photo of these slides tomorrow when it is light)

I speak tacitly and in the same breath of both the macroscale and the microscale the structure seems closed but indicates that exchange is possible into and out of the picture plane, adding depth. It is a structuring of the present instant a presence in which past and future meet, connecting me/us to our deepest shared past when life was beginning to take shape. We are emergent properties of our origin with commonalities at the deepest level of our existence. The thread, the line is unbroken, it could not have been otherwise.

I am interested in Chinese art in particular ancient Chinese art as in the case of scrolls one sees a synthesis of painting poetry and calligraphy. In Karen Smith’s lecture, I was fascinated to hear that abstract art is unknown in Contemporary Chinese art. This really surprised me. I do understand the politics of contemporary Chinese art, its background, how it has come about out of such social turbulence. I think that perhaps, Chinese contemporary art will begin to move towards a re-evaluation of its ancient past in terms of the work of the unsurpassable quality, which was achieved by their artists in earlier times. I saw an exhibition in Monaco this Summer where some of the greatest treasures of Chinese Art were to be seen, and it left quite an impression on me – it was one of the best shows I have ever seen and a revelation in terms of its content. I have in the past made works directly inspired by the Song poems – circular in form, works on silk combining landscape and poetry – these have influenced my paintings compositionally too.