So far in these reflections, I have wanted to extend the introduction of my painting to better evidence where I am coming from with respect to it, at the same time building an interface with the digital.

Thinking now about my contribution to our first group exhibition coming up on 1st December at 2 Girls Gallery; it will be the second digital piece I have shown, the first one being as mentioned in an earlier post, in the form of a text-as-painting experiment I did in response at the very beginning of this first term, to a call for submissions for the Free Education Exhibition at Central St Martins SU Gallery – this show is current – see below my exhibit in situ (and the header image being the entire gif playing): 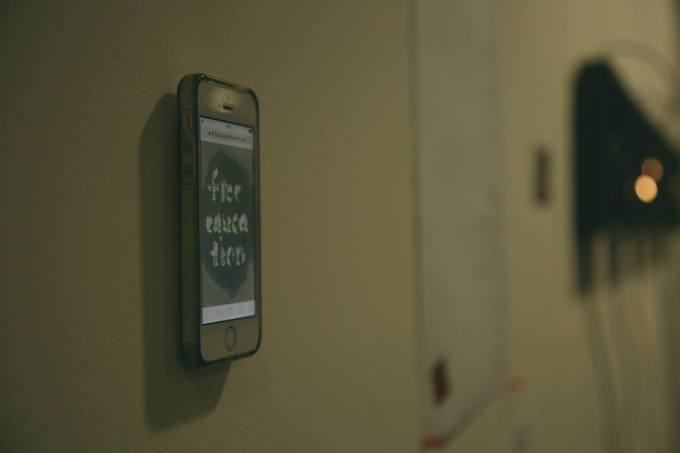 The upcoming show is curated by Donald TakGuy, a former MA student, who is also a painter. Donald’s MA project is of particular relevance to me – I see that his heart is still in painting. It was very interesting in his presentation that he spoke of the disadvantages of exhibiting the digital in that it inevitably needs continuous attention, which is something I had not thought of.

So far I have had to deal with the physical challenges of making and exhibiting not only paintings but sculptural pieces too.

I was interested to see how Donald had used for his final piece many screens, placed all together as a body.  This would be something that has resonance with my work as it is suggestive of the body physical, potentially leading back or alluding to the bodily consideration in the painting itself.

Donald evidences his curatorial strand in this upcoming exhibition at 2 Girls Gallery and I am interested to know what my response will be to not only my own piece but the exhibition as a whole. The working title is HYBRIDS – fields of experiment which I particularly like, having for me, evocations of breeding experiments in biology.

I realise I have been making a mistake in thinking that my digital piece should be sophisticated, I have been envisioning outcomes which would take a whole team of technicians and this is obviously not appropriate  – in other words, I have been thinking too much of potential rather than (immediate) possibility.

This first digital piece is the beginning of a cultivation, creating the first simple fundamental unit, beginning the basis for the language of the digital piece – in the same way as I have developed my painting.

The exhibition is being installed by several MA students, who are organised and focussed, having communicated well using our course wiki space also by email exhibition meeting

They have to accommodate a lot in a very small space, making it extra-appropriate, I believe, for me to provide something simple – in the form of a gif file showing a painting sequence accompanied perhaps by a small 20x20cm (wall hanging) painting along with an explication suitable for the exhibition label.