I feel that I am aware of my context as a painter specifically in today’s art world. Increasingly women are making their places as artists and two contrasting painters, both women, come to mind immediately, the first is Etel Adnan.

I mention Etel Adnan first as I find her particularly interesting in that she was first a poet, and continues as such, painting in parallel. She has achieved acclaim as a painter very late on (she is now 92) and I find it interesting to have her thoughts on this in a 2016 interview:

Reaching people beyond the exclusive coterie of the contemporary art world is important to Adnan, who feels ambivalent about suddenly becoming one of its rising stars. The art market, for one thing, dismays her: “Some collectors don’t even look at the art they own. It is not about art anymore, it is about ego – ‘I own ten Picassos’. So what! I would rather have one reproduction and look at it than ten sitting in the bank.” She also regrets that she cannot make the most of her position, confessing, “I wish it had happened before, because I make money and you know I cannot spend it – I cannot go on aeroplanes, I cannot do many things. And it breaks my heart.”

Her sadness, however, is short-lived. She brightens within seconds, countering, “On the other hand it’s good it did not happen before because I had peace of mind, and I stayed meditative about art. I am not against galleries – it is necessary for art to be shown and reach the public – but they have their own financial pressures. So they have to keep selling and the artist has to keep producing. I have not fallen into that trap. I do not think a real artist falls into that trap. They do what they have to do anyway.” 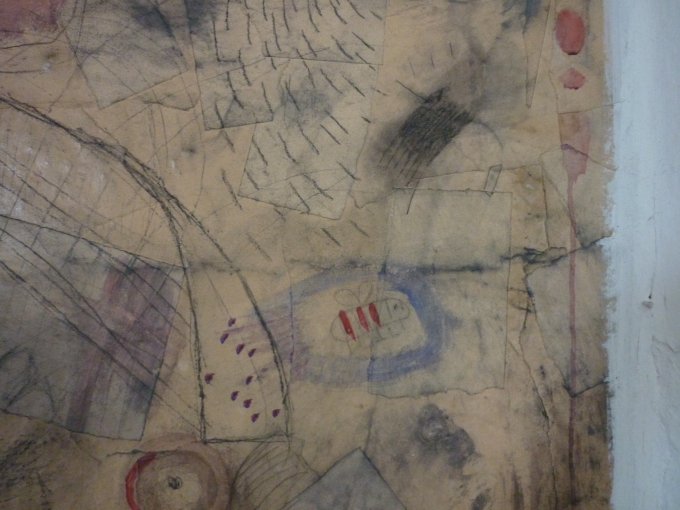 Julie Mehretu, the next one who comes to mind, by contrast, has found acclaim by making an assertive statement of the scale of her work. She also weaves into her narrative political references such that the whole picture becomes a potent mix, well-designed for today’s globalised art world.

In a way, Mehretu’s work reminds me of something I did years ago when I wanted to stabilise a cracked wall here at the studio, in the kitchen area. I papered the wall with lining paper, and due to the rough nature of the wall (ancient lime plaster), the surface had all sorts of relief details on it and the casual paper marouflaging also made the surface interesting. I call such a surface an “already- interesting” surface. I think it is also what Paul Coldwell (see his recorded course lecture, his second one this term) would call a matrix.

Already-interesting surfaces I find entirely different to approach than blank surfaces (such as when I start a painting). Of course, it entirely depends on one’s connection with that surface, empathy with it, sensitivity to it, allowing for its interpretation and regeneration.

The mural was very liberating, I built up layers of gestures and marks of paint and graphite, polishing it, rubbing it back as I went forward with it, added to it, interpreting its growing surface. What was liberating was that I had set up a system which it was impossible to fail at, all I needed to do was just keep going. In the spirit of the inseparability of art and the domestic life (which is the way of it here), my idea was that the mural would be continued indefinitely, even the kitchen splashes (it is behind the cooker) would become part of the work.

I made two other secondary murals in the same spirit. Interestingly these murals have created a great deal of interest from visitors, and I have kept them as they were so far. They could potentially be peeled off the wall and new ones created – interesting potential here.

I would like, perhaps, one day to do a large scale site-specific permanent piece for a public space. The mural would be invested in the painting’s own inner narrative; that it is potentially boundless, ever-expanding, so large scale would be appropriate. Thinking about contemporary art today, I see that much of it soon begins to look dated because it has been specifically designed to comment on a particular time and place. This was highly appropriate in history when art was the way of making a political statement, also a historical record but nowadays with so much that is political permeating all levels of our lives, I see that a quality of agelessness has been largely lost. Art is always of its time, it cannot be otherwise but fixed, imprisoned only within its time, I see as a limitation. Of course, there are endless counter-arguments, and I am aware of this also that what I am saying is very open to misinterpretation. What I am trying to say is that the work must  however political it is, also be able to stand alone, hold its own even when all its argument has been taken away.

Cracks in walls, Sistine Chapel cracks – God creating Adam. The space between (God’s and Adam’s hand/finger). Collect images of the cycle of works corresponding to this scenario

cracks are lines, lines are cracks